Where to find Breaksticks
Break sticks can be purchased online from many vendors. However, many of those vendors are also associated with breeding kennels. Since PBRCs mission is to help reduce the number of homeless pit bulls, we will only recommend vendors that also support rescue.

What Is a Break Stick?
A break stick is a device inserted into the mouth of a pit bull (behind the molars) to facilitate the release of its grip on another dog.

Remember: pit bulls do not have a special mechanism or enzyme that allows them to "lock” their jaw, nor do they possess a higher than average “bite pressure.” They simply have the determination of a terrier.
Not all pit bulls are aggressive toward other dogs. But because the breed has a somewhat higher tendency for dog aggression, break sticks are useful tools to have in a multi-dog household. Please read the following guidelines before attempting to break up a fight using a break stick.

Why Should Responsible Pit Bull Owners Consider Having a Break Stick?
Because canines are pack animals, fights are possible in any multi-dog household, no matter what breed of dog you own. A responsible owner should take measures to prevent such fights, but he or she should also be prepared for the worst. The goal of any owner should be to break up a fight quickly and efficiently. The majority of breeds will snap erratically at their opponent, biting and releasing repeatedly. As terriers, pit bulls will usually bite and hold. Contrary to popular myth, this is not some kind of special pit bull behavior; it is merely terrier behavior. As its name suggests, a break stick is designed to break this determined terrier hold. This is the safest, easiest, and most effective way to stop a fight.

Do not attempt to use a break stick on other dog breeds.
Attempting to use a break stick on other breeds could result in serious injury to the person using the stick. Since other breeds will unpredictably snap and bite instead of getting a grip, you are far more likely to be bitten. You also should not attempt to use a break stick with other terriers. While all terriers grab and hold, pit bulls are far less likely to redirect their bite on an intervening human than, say, a Jack Russell Terrier. For the same reason, you also need to be very careful when separating your pit bull from another breed. Your pit bull will probably not bite you, but you might get bitten by the other dog.

Be Prepared
There are many ways of managing a multi-dog household. Your primary goal should be to prevent fights before they begin. Many, many pit bulls—even pit bulls from fighting backgrounds—get along just fine with other dogs. Nevertheless, the breed’s tendency for dog aggression is slightly higher than the average dog, so constant vigilance is vital.

If a fight does occur, you will be better prepared to break it up if you have already rehearsed the procedure before the need arises. Look into your dog's mouth and find the gap where the teeth do not meet at the very back of the jaw. This is where you are going to insert the stick.

Before Grip
If the dogs don't have a hold yet, you may be able to break the fight using other methods. Jerking the dogs back by their collars, a loud and firm break command, a bucket of cold water, a water hose, or placing a barrier such as a baby gate between the two dogs may be enough to stop them. Be safe: don't put your hands anywhere near the mouth of the dogs.

How to Break Up a Fight
If one of the dogs has a grip, it’s time to use a break stick.
It is best if there are two people to break up a fight, but you can do it by yourself if you have no choice. If both dogs are fighting and you are alone, you might need to tie one of the dogs to something solid. When one of the dogs is tied up, you must "break" the one that is not tied first, and pull him/her off right away.
Walk over to the dogs, straddle one that has a hold, and then lock your legs around the dog's hips just in front of the hindquarters. Make sure your legs are locked securely around the dog. Your break stick will be in one hand, so with your free hand, grab your dog firmly by his collar and pull upward slightly.
Insert your breaking stick behind the molars where the gap is found. Sometimes you need to work the stick in just a bit if the gap is small. The stick should be inserted from ½ to 1½ inches into the dog's mouth.
Turn the stick as if you're twisting the throttle of a motorcycle. This action will cause the dog to readjust its grip, and it will bite onto the stick, releasing the other dog. If both dogs have a hold, you will then have to break the second dog from the first. 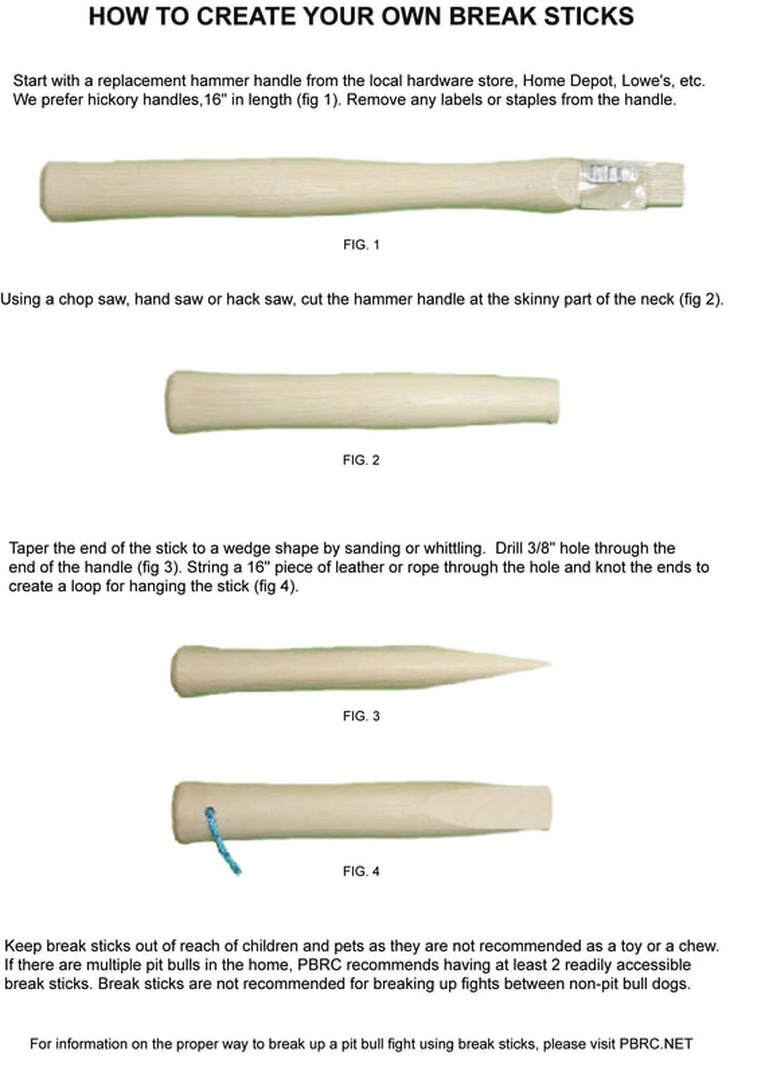